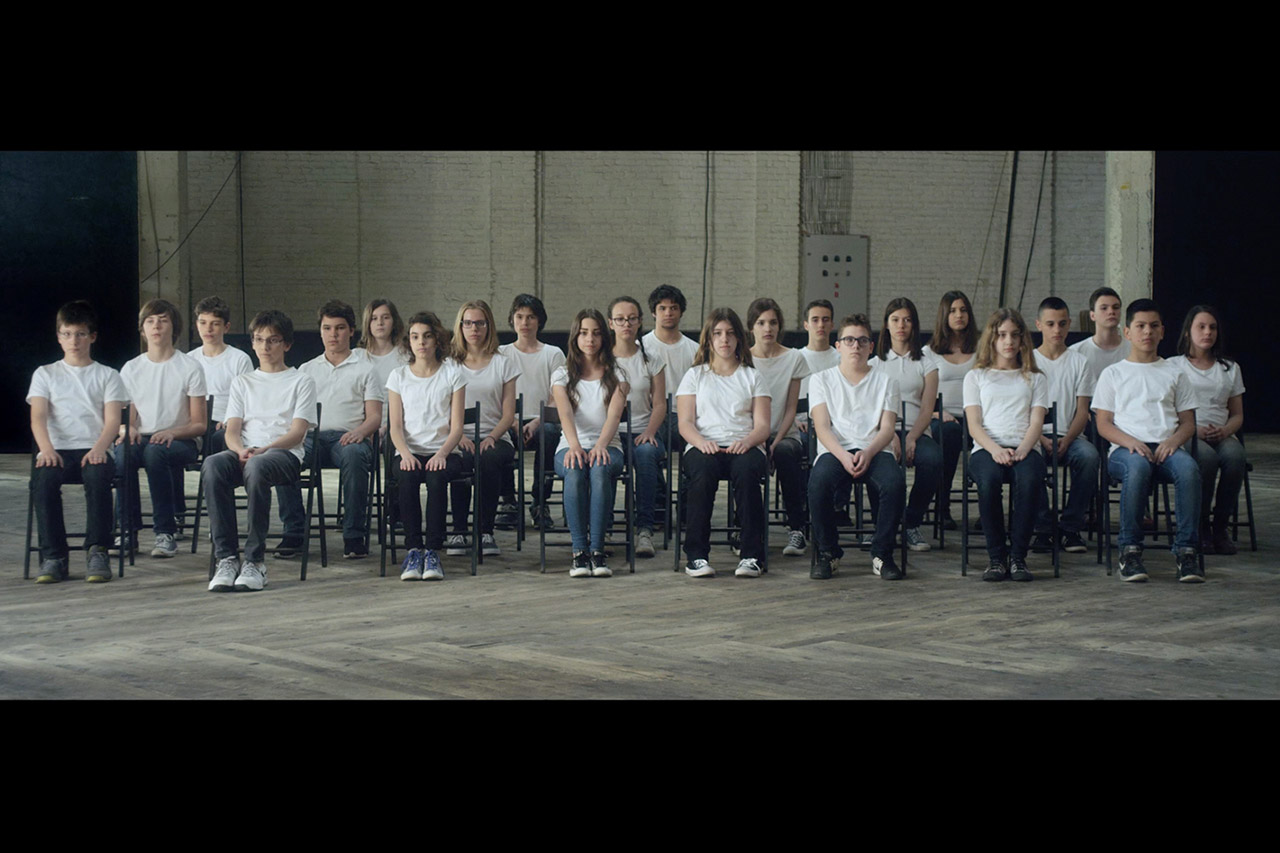 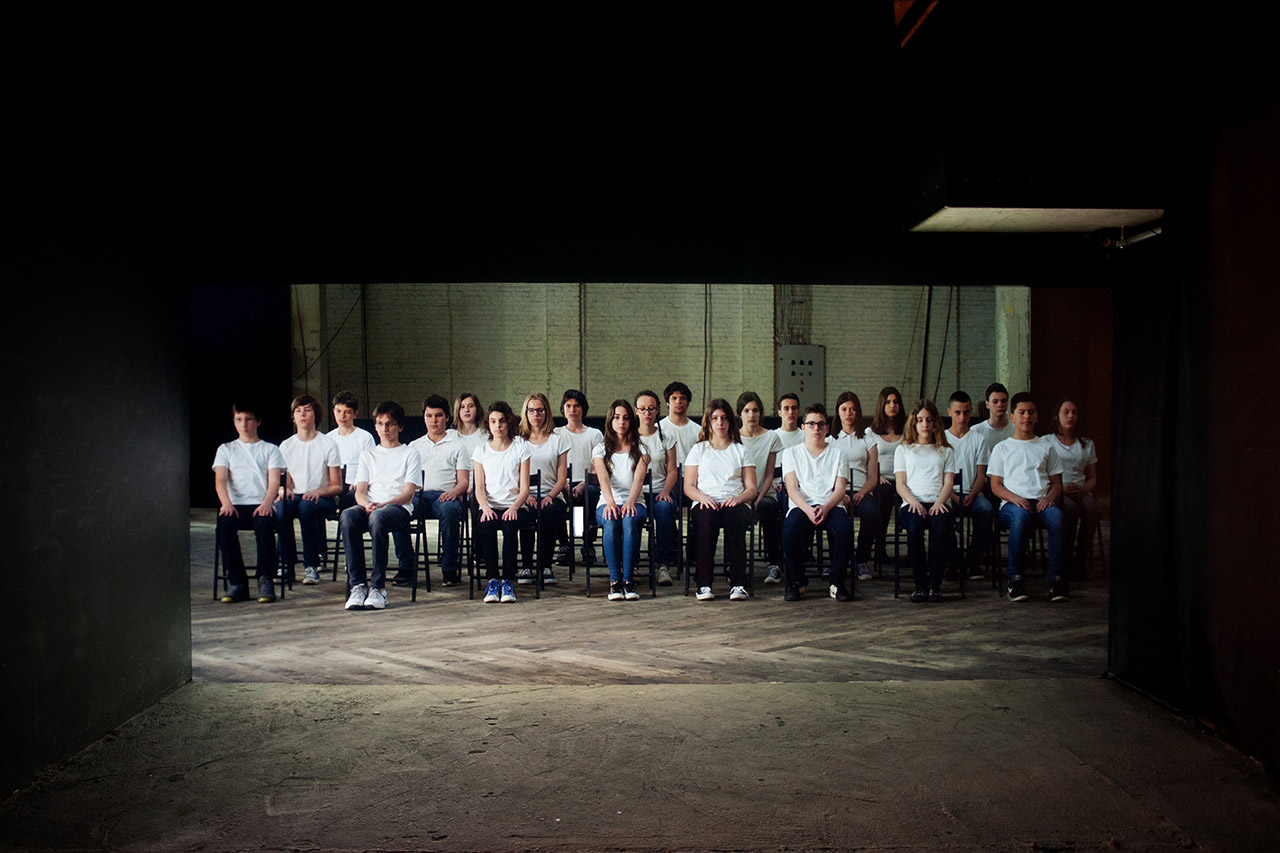 (Based on Hannah Arendt’s text We Refugees originally published in 1943 and Stefan Zweig’s novel The World of Yesterday, 1942)

A group of teenagers is sitting on the stage, reciting a text. Their performance is conducted in the form of a traditional Greek chorus whose function was to comment events unfolding in front of the public. Only, there is no the public here. The sentences these young people are reciting are coming from a text Hannah Arendt wrote in 1943 – We Refugees – dedicated to the exiled and exterminated European Jews. The video installation We Refugees is taking that text for its starting point, while trying to question the notions of war, intolerance, exile, responsibility and solidarity in the midst of probably the biggest refugee crisis happening on the European soil after the end of the Second World War.

We go where they are still letting us. Always further away. To people we don’t know and who don’t want us.

We left our relatives, our best friends have been killed.

As soon as we were saved – and most of us had to be saved several times – we started our new lives and tried to follow as closely as possible all the good advice our saviors passed on to us. In a friendly way we were reminded that the new country would become a new home.

We were told to forget. And we forgot quicker than anybody ever could imagine.

Only sometimes we raise objections against this imposed forgetting.

In order to forget more efficiently we rather avoid any allusion to camps we experienced in nearly all European countries – it might be interpreted as pessimism or lack of confidence in the new homeland.

Besides, how often have we been told that nobody likes to listen to all that.

Even among ourselves we don’t speak about this past. After so much bad luck we want a course as sure as a gun.

There are those odd optimists among us who, having made a lot of optimistic speeches, go home and turn on the gas or make use of skyscraper in quite an unexpected way. They seem to prove that our proclaimed cheerfulness is based on a dangerous readiness for death.

Brought up in the conviction that life is the highest good and death the greatest dismay, we became witnesses and victims of worse terrors than death – without having been able to discover a higher ideal than life.

Although death lost its horror for us.

Instead of fighting – or thinking about how to become able to fight back – refugees have got used to wishing death to friends or relatives; if somebody dies, we cheerfully imagine all the trouble he has been saved. Finally many of us end by wishing that we, too, could be saved some trouble, and act accordingly.

Nobody cares about motives, they seem to be clear to all of us.

Our suicides are no mad rebels who hurl defiance at life and the world, who try to kill in themselves the whole universe. Thiers is a quiet and modest way of vanishing; they seem to apologize for the violent solution they have found for their personal problems. In their opinion, generally, political events had nothing to do with their individual fate.

Behind this front of cheerfulness, they are desperate.

Our new friends hardly understand that at the basis of all our descriptions of past splendors lies one human truth: once we were somebodies about whom people cared without ever being told that we were undesirable.

Now we try the best we can to fit into a world where you have to be sort of politically minded when you buy your food.

The less we are free to decide who we are or to live as we like, the more we try to put up a front, to hide the facts, and to play roles.

Our identity is changed so frequently that nobody can find out who we actually are.

Man is a social animal and life is not easy for him when social ties are cut off. Many of us tried a change of identity. And this curious behavior makes matters much worse. As long as we can’t make up our mind to be what we actually are, nobody can foretell all the mad changes we will still have to go through.

A man who wants to lose his self discovers, indeed, the possibilities of human existence, which are infinite, as infinite as is creation. But the recovering of a new personality is as difficult – and as hopeless – as a new creation of the world. Whatever we do, whatever we pretend to be, we reveal nothing but our insane desire to be changed, not to be ourselves.

All our activities are directed to attain this aim.

We pretend that this is our mother tongue. We don’t call ourselves stateless. We are willing to become loyal Hottentots if needed. If patriotism were a matter of routine or practice, we should be the most patriotic people in the world.

But since patriotism is not yet believed to be a matter of practice, it is hard to convince people of the sincerity of our repeated transformations. The natives, confronted with such strange beings as we are, become suspicious. From their point of view only a loyalty to our old countries is understandable.

That makes life very bitter for us.

One may be surprised that we are still not discouraged. It is true that men seldom learn from history, but it is also true that they may learn from personal experiences which, as in our case, are repeated time and again.

But, if we should start telling the truth that we are nothing but refugees, it would mean that we expose ourselves to the fate of human beings who, unprotected by any specific law or political convention, are nothing but human beings. We can hardly imagine an attitude more dangerous, since we actually live in a world in which human beings as such have ceased to exist for quite a while.

We go where they are still letting us.

The work was realized with the support by the Ministry of Culture, Republic of Serbia.