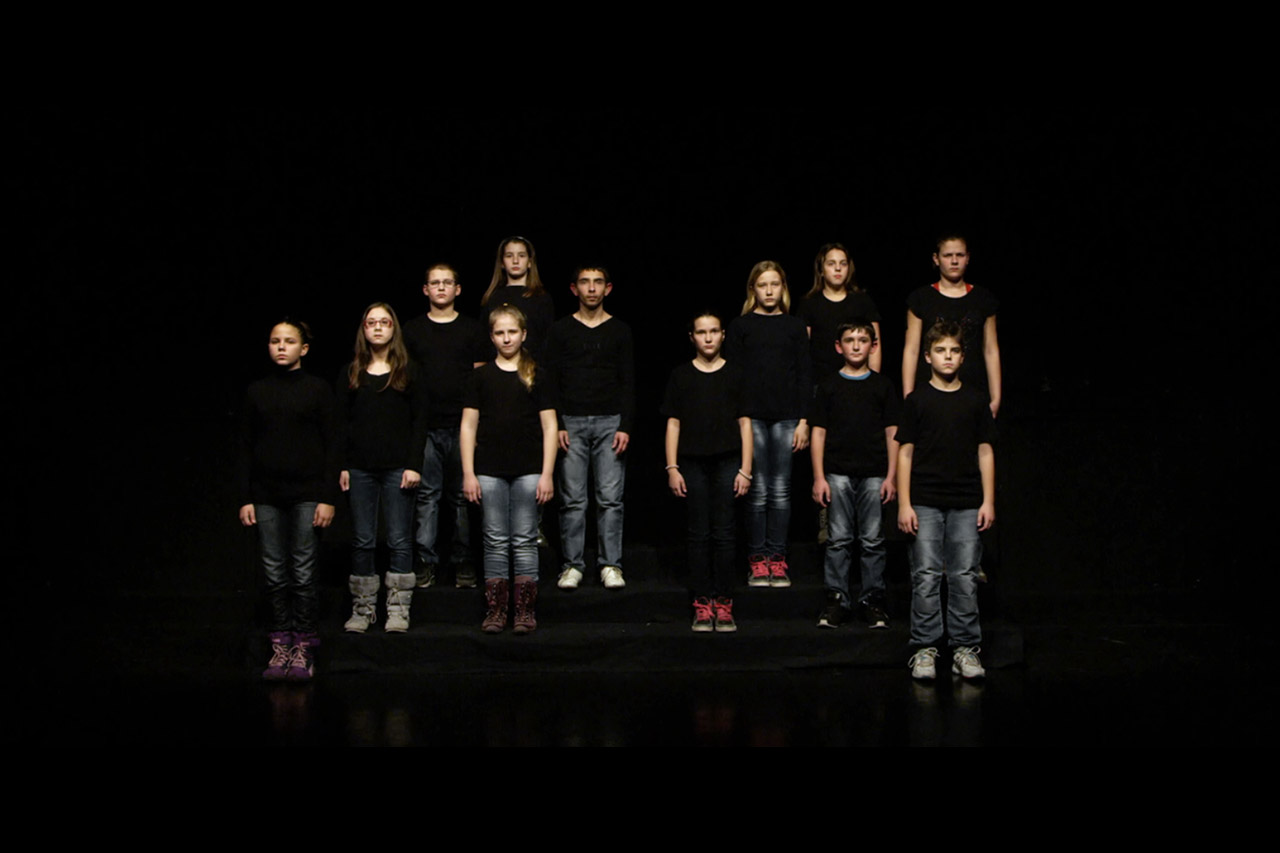 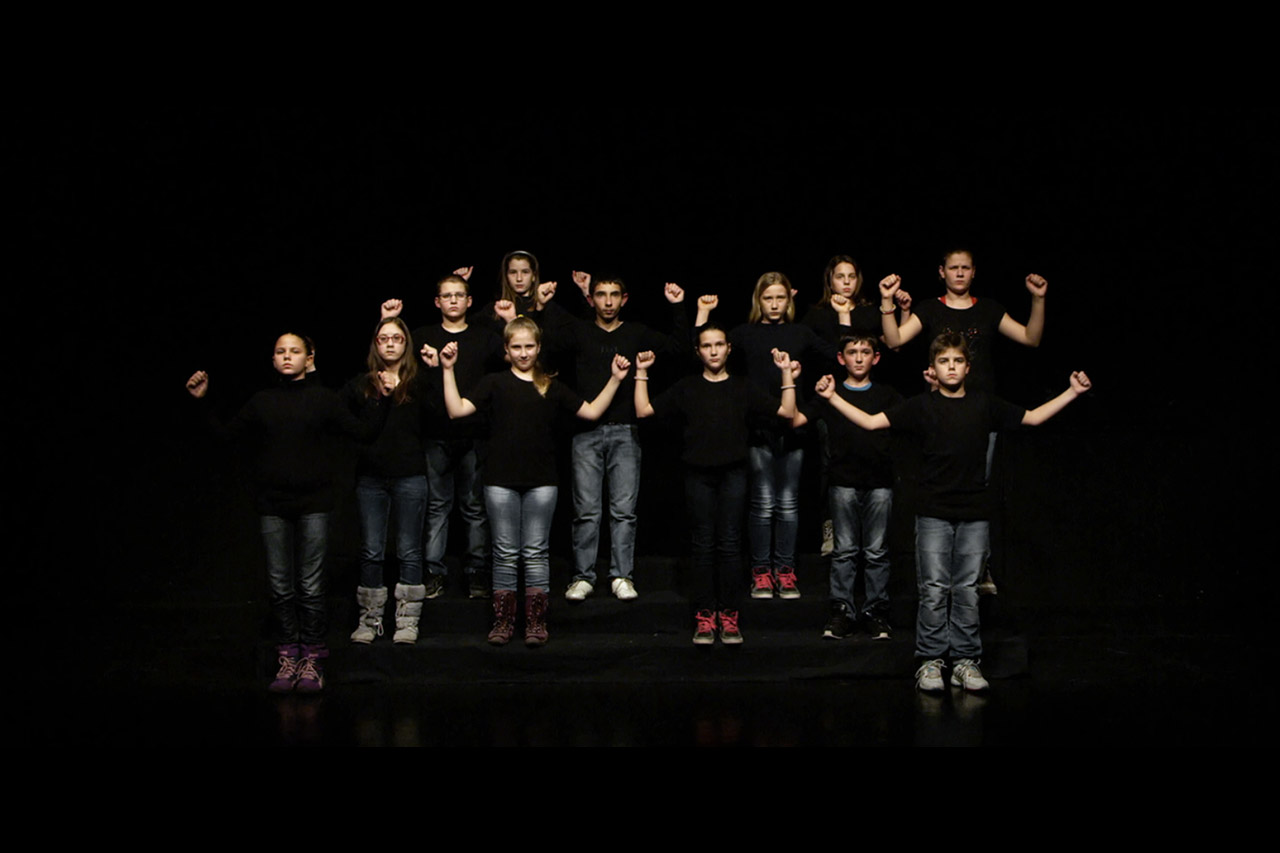 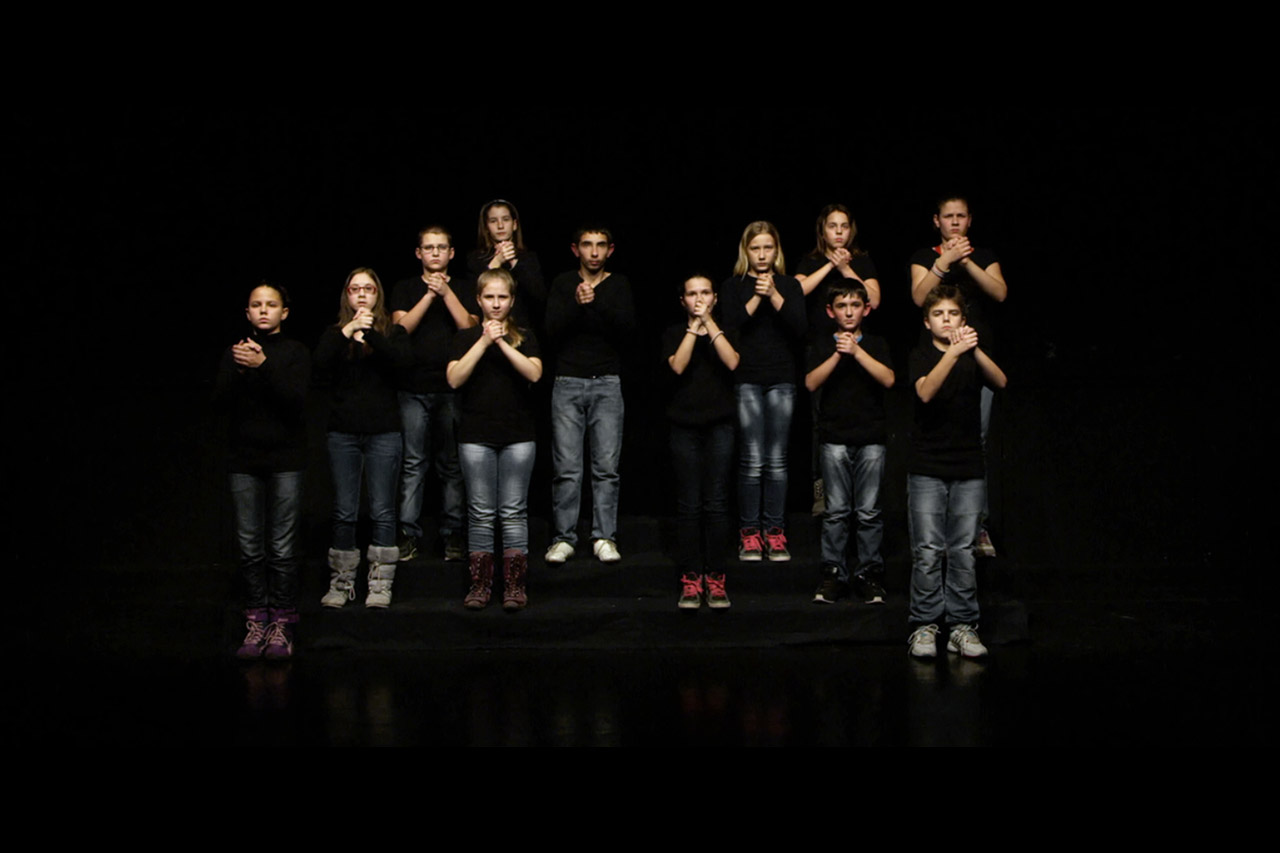 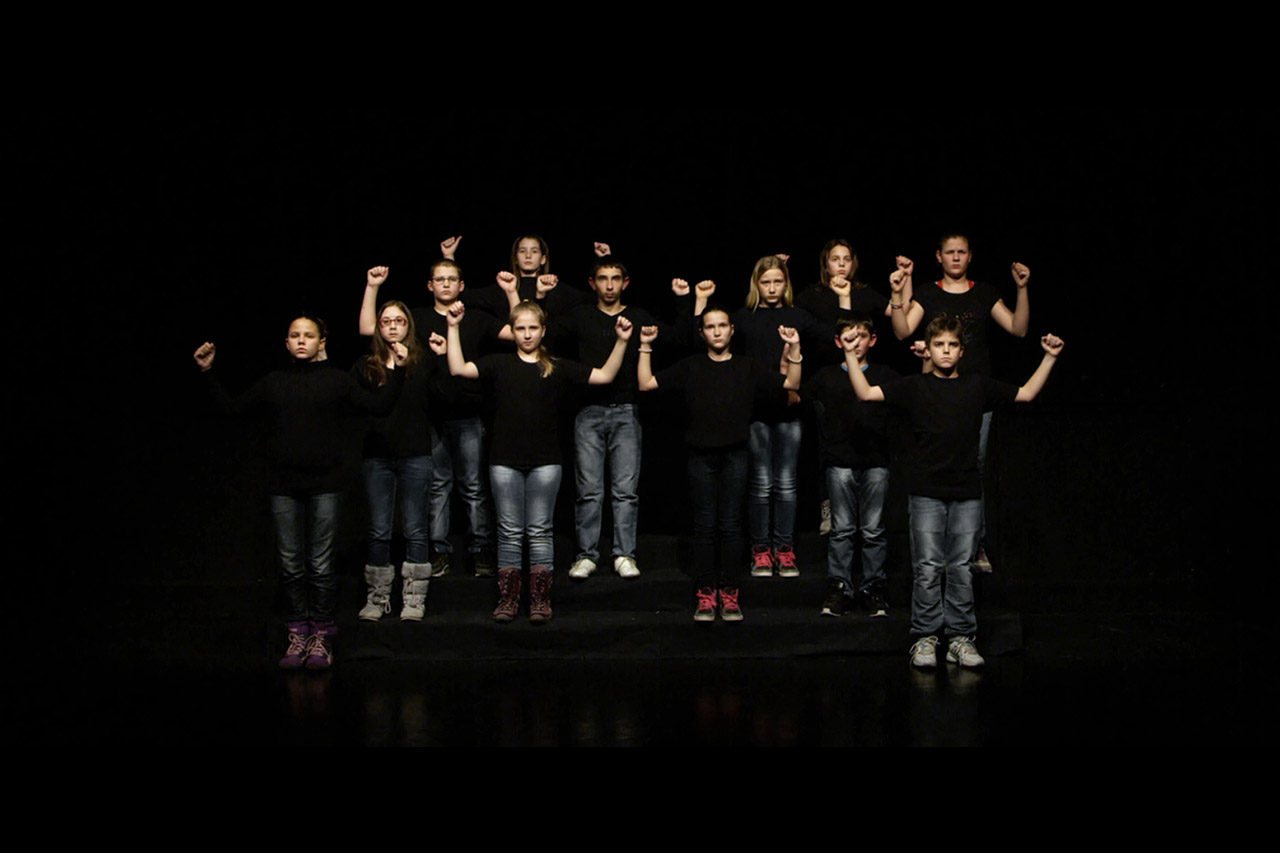 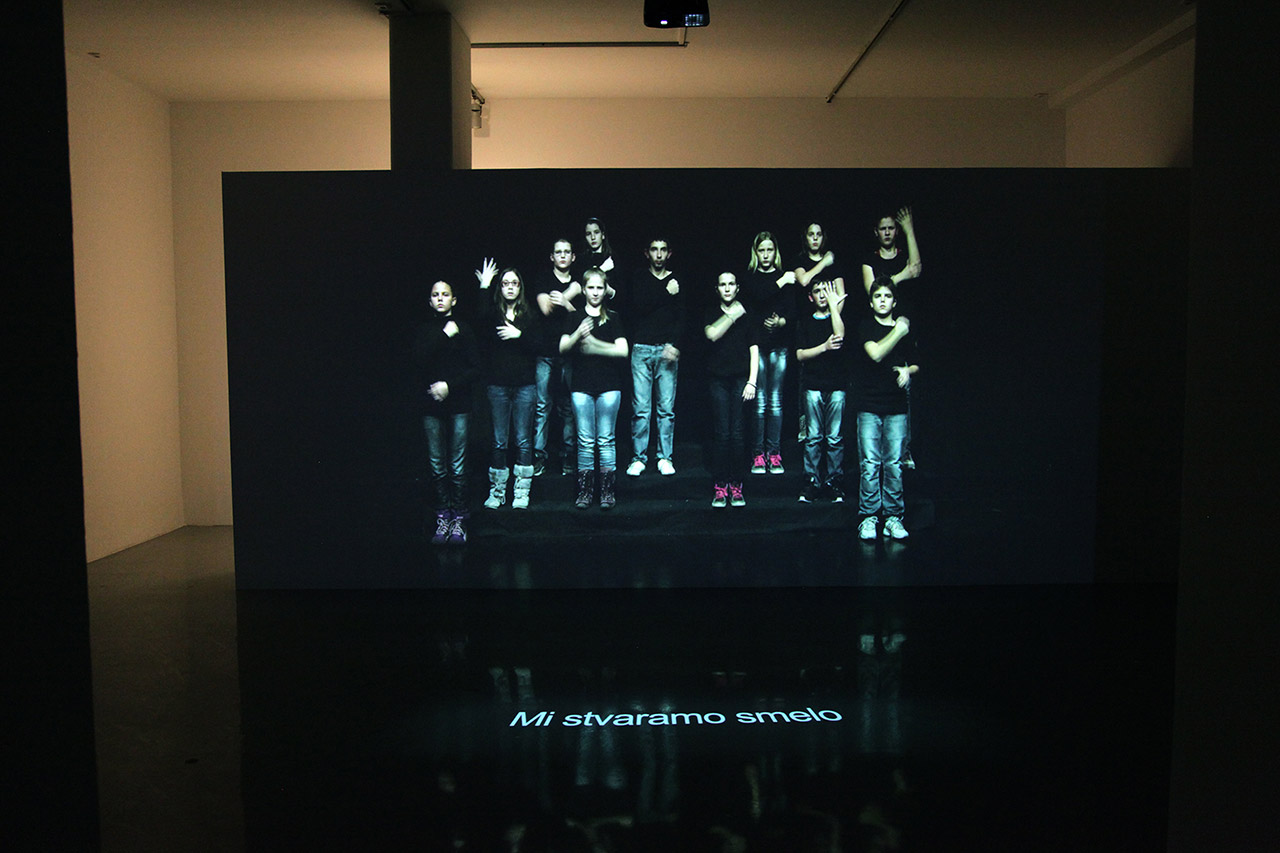 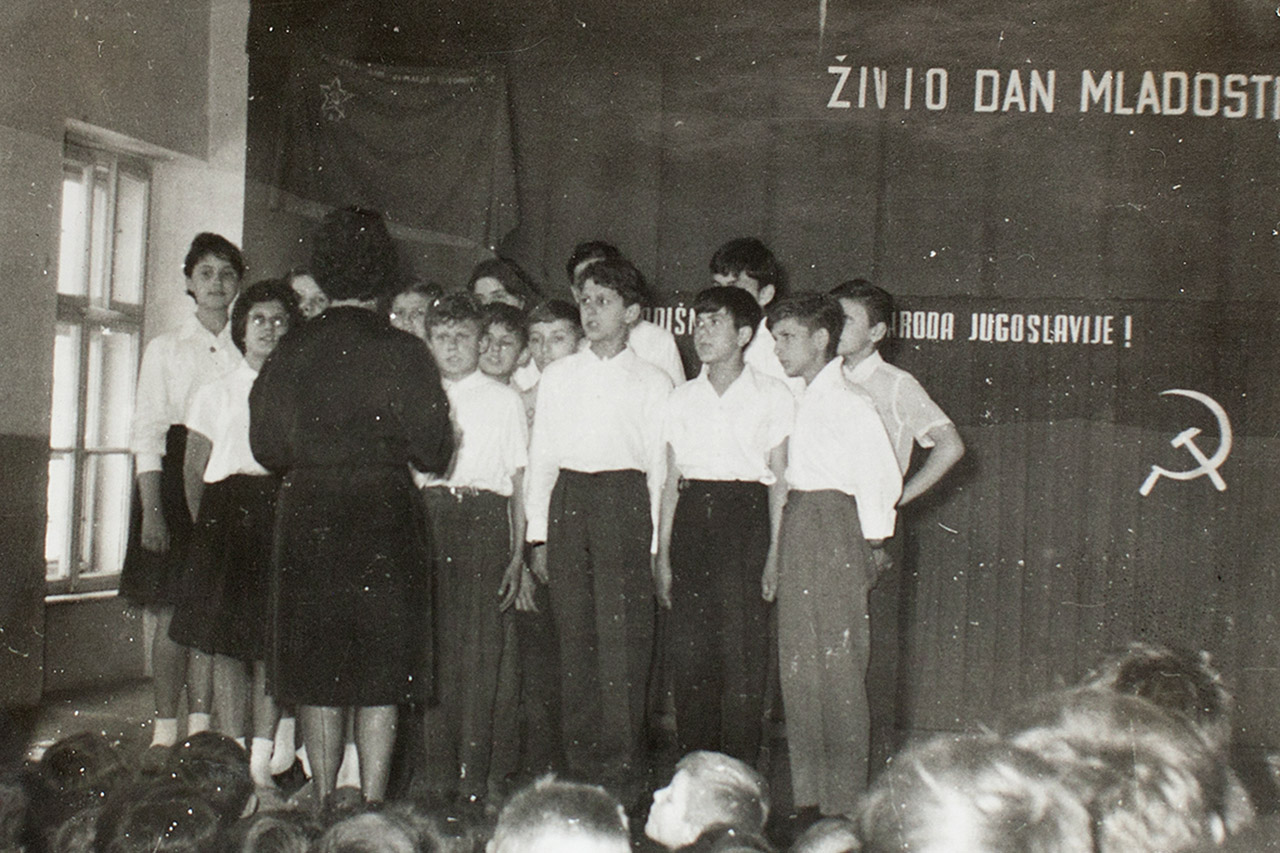 The choir, from the photo-album sent to the President Tito
from the Pioneers and Youth of the I Educational institution for deaf children,
Zagreb-Ilica, 1962 (from the collection of the Museum of Yugoslavia, Belgrade)

There is at least one photograph of a choir in almost every album that Tito ever received from the children of Yugoslavia. Accordingly, the album that the Pioneers and Youths of the Institute for the Education of Deaf Children in Zagreb sent to the President on his birthday in 1962 duly contains a photograph of their school choir. The photograph features 14 children singing onstage, with their conductor in front of them and a banner saying ‘Živio Dan mladosti’ (Long live Youth Day) in the background.

This photograph is the starting and visual reference point in Two Choirs. The difference is that, unlike the photograph, the video work shows the children performing the song in sign language, universally accepted today, but not in official Yugoslav schools for the education of hearing-impaired children during the 1960s. At that time and all the way to the 1990s, the schools insisted that hearing- and speech-impaired children vocalise words and thus in the photograph, the children were captured whilst singing. In the video work, the children are performing the song ‘Mi stvaramo smelo’ (We Create Boldly) by Srećko Đurđević, found in the songbook Deca pevaju Titu (Children Singing to Tito), which contains patriotic children’s songs deemed suitable for choir performances during state holidays and other school, that is, Pioneer ceremonies. For decades, numerous choirs from across Yugoslavia performed that song and similar other songs dedicated to the homeland, construction, brotherhood and unity, celebrating youth and élan vital. The hearing-impaired children’s choir featured on the photograph sent from Zagreb in 1962 were probably performing a similar song.

Starting from that 1962 photograph, Two Choirs examines the character of dominant ideologies, past and present alike, as well as roles children are ascribed in their successful presentations and legitimisations.

Together we mightily march and sing,
under the flag of our labor, new deed is emerging.

For are muscles are strong, our brains are fresh and bright
every one of us is willing for fatherland to sacrifice.

The work was realized in cooperation with the Association of interpreters for hearing impaired persons, Serbia (UTLOSS). Children participating in the work – pupils of the 5th grade of the Elementary school “MIhajlo Pupin” from Zemun and protégés of the “Stefan Dečanski” boarding school for hearing impaired children.
The work was realized with the support and help of Dijana Dukić, Vladan Obradović, Srdjan Bajski, Pavle Pekić, Museum of Yugoslav History and Belgrade Drama Theater.

Ana Bogdanović, On Awaiting the History in the Work of Ana Adamović, in: Two Choirs, exhibition catalogue, MOCA Belgrade, 2018