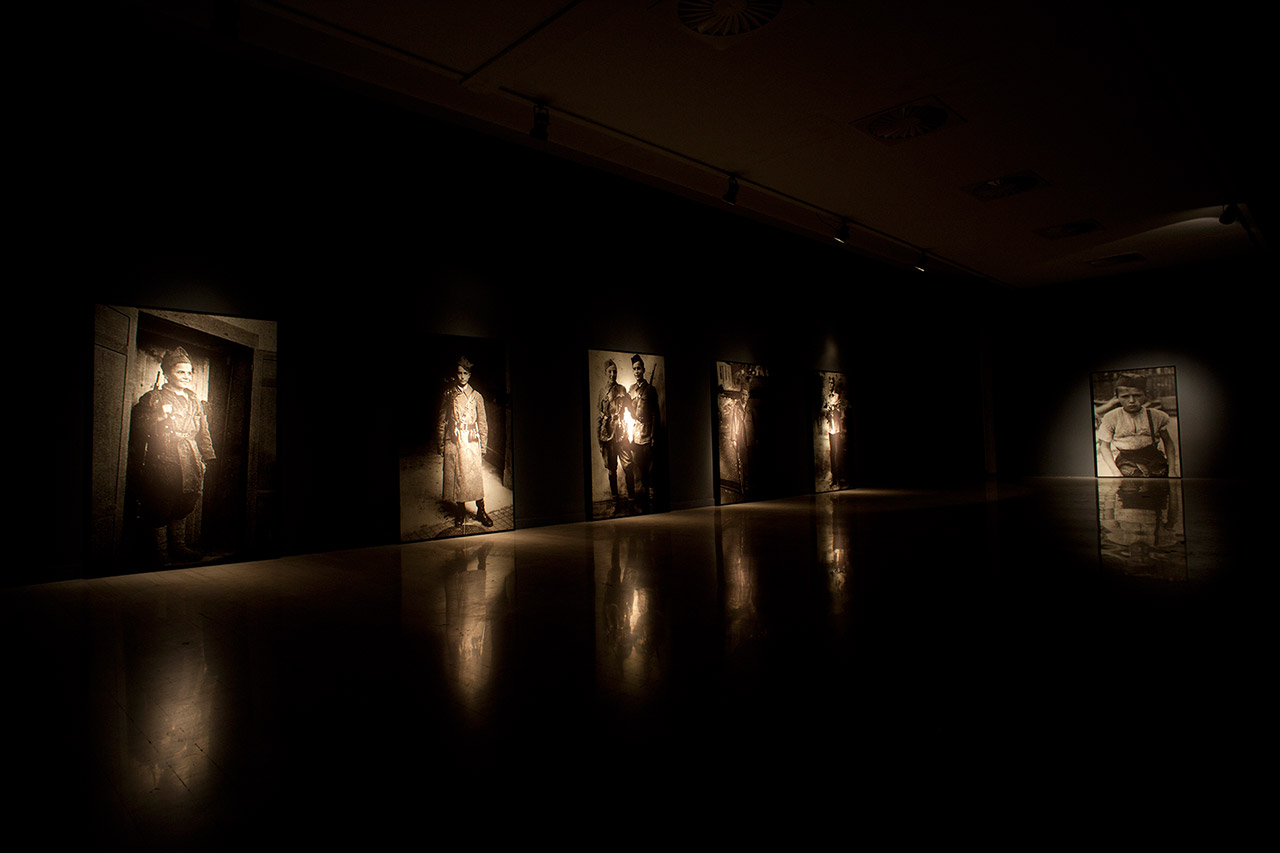 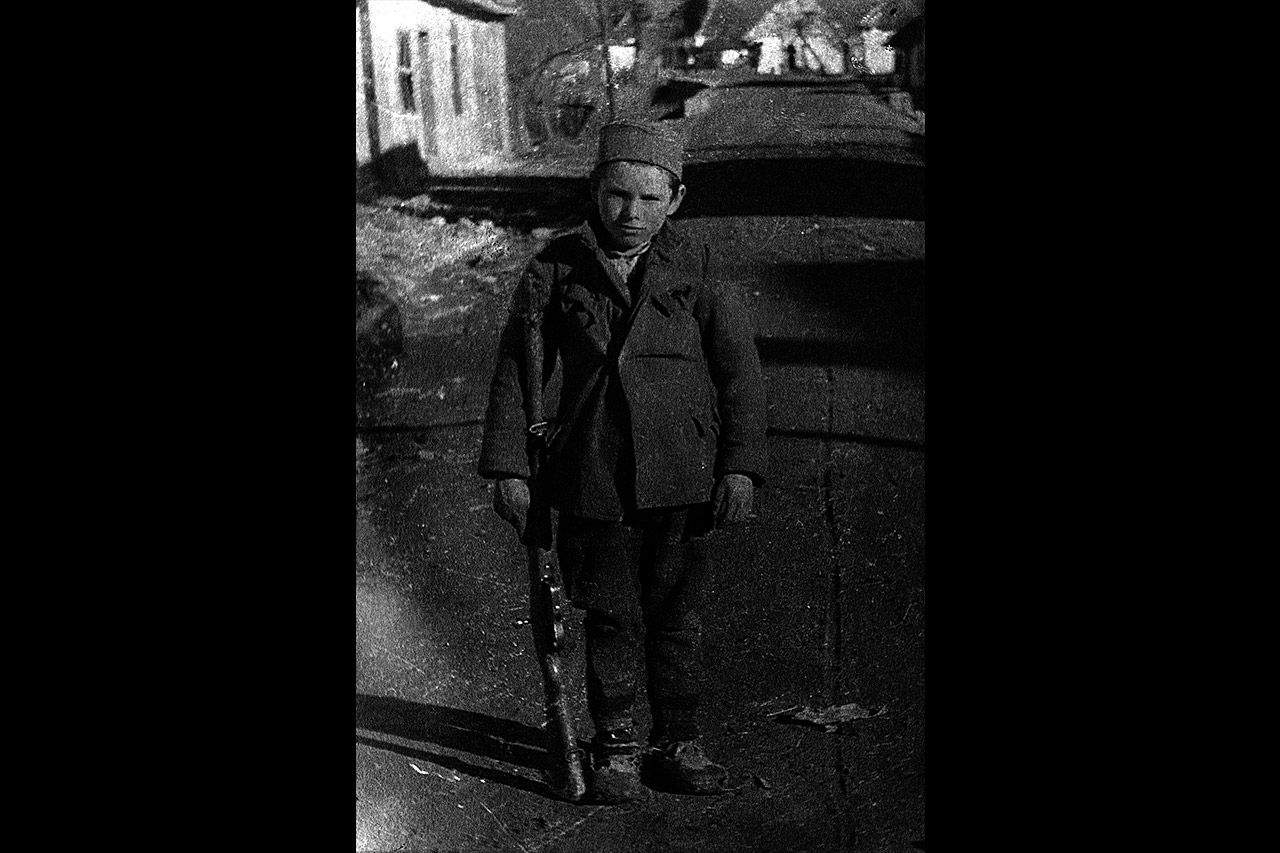 The youngest courier, 1941,
from the collection of the Museum of Yugoslavia,
Belgrade 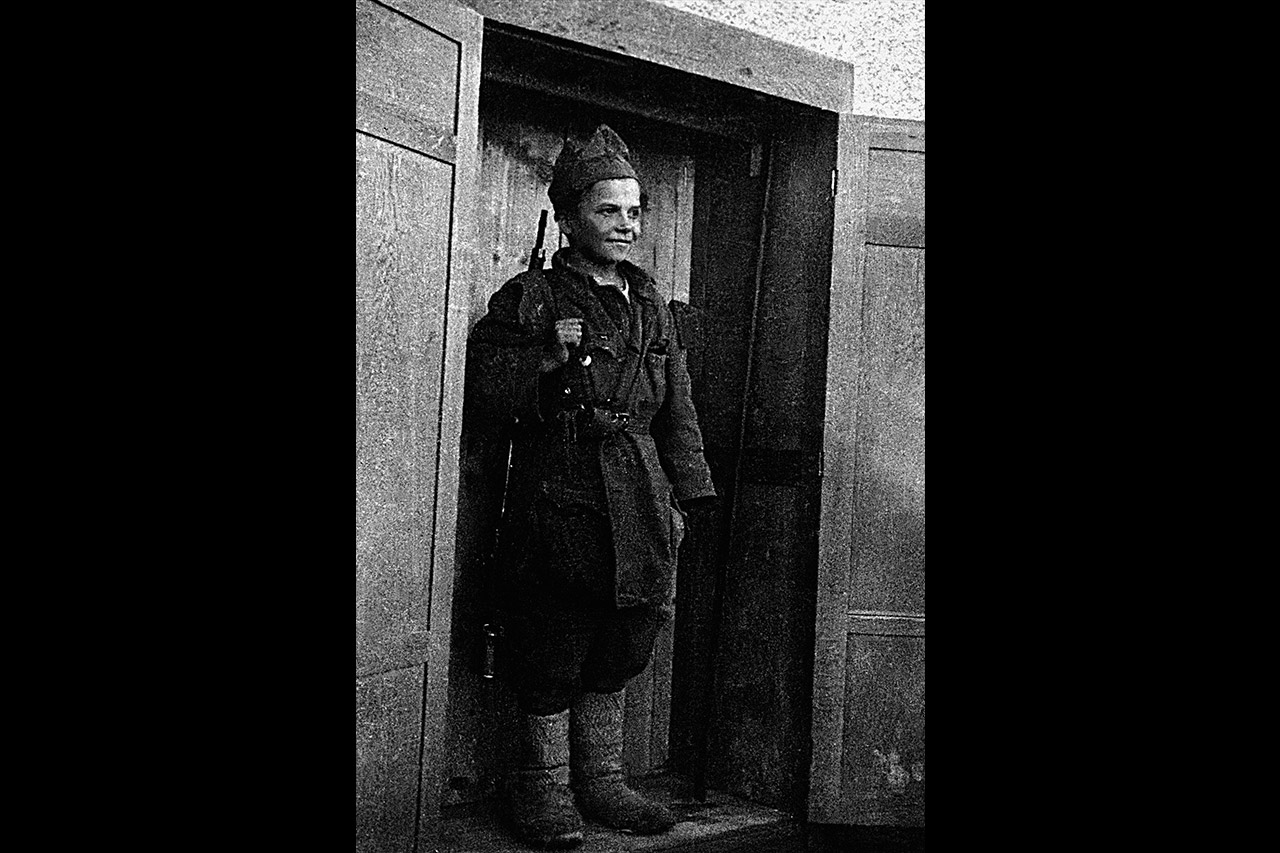 Pioneer-fighter on guard,
from the collection of the Military Museum,
Belgrade

After the Second World War, generations were raised with the iconic image of children who fought in the war against fascism. That is true not only for the Former Yugoslavia, but many countries around the world. Today, the very image of the child holding a weapon is the paradigm of violation of all human and children rights.

Why were children couriers among partisans treated like heroes, while children who were the last stronghold in the battle for Berlin represented the very essence of the Hitler’s evil regime? What could be a vision of the future a society is offering to the young generations while raising them with images and narratives about children warriors who sacrificed their lives for their country?

Having these questions on mind as a point of departure, the work is exploring one possible image of childhood. Photographic material used for the installation are authentic photographs of young couriers from the Second World War in Yugoslavia, images that generations of ex-Yugoslavs were familiar with from the earliest childhood, from their very first ABC books.

The Tragedy of King Richard III

Fellows in arms, and my most loving friends,
Bruis’d underneath the yoke of tyranny,
The leisure and enforcement of the time
Forbids to dwell upon; yet remember this:
The prayers of holy saints and wronged souls,
Like high-rear’d bulwarks, stand before our faces;
And those whom we fight against
Had rather have us win than him they follow.
For what is he they follow?
Truly, gentlemen,
A bloody tyrant and a homicide;
One rais’d in blood, and one in blood establish’d;
One that made means to come by what he hath,
And slaughtered those that were the means to help him;
The wretched, bloody, and usurping boar,
That spoil’d your summer fields and fruitful vines,
Swills your warm blood like wash, and makes his trough
In your embowell’d bosoms.
If you do sweat to put a tyrant down,
You sleep in peace, the tyrant being slain;
If you do fight against your country’s foes,
Your country’s foes shall pay your pains the hire;
If you do fight in safeguard of your wives,
Your wives shall welcome home the conquerors;
If you do free your children from the sword,
Your children’s children quits it in your age.
Cheerly on, courageous friends,
To reap the harvest of perpetual peace
By this one bloody trial of sharp war.
A thousand hearts are great within my   bosom
Advance our standards, set upon our foes
Upon them! Victory sits on our helms.

Photographic material from the collections of the Military Museum and the Museum of Yugoslav History in Belgrade
Voice-over- from Richard III, by William Shakespeare
English narrator: Paul Leonard Marry
Serbian narrator: Pavle Pekić