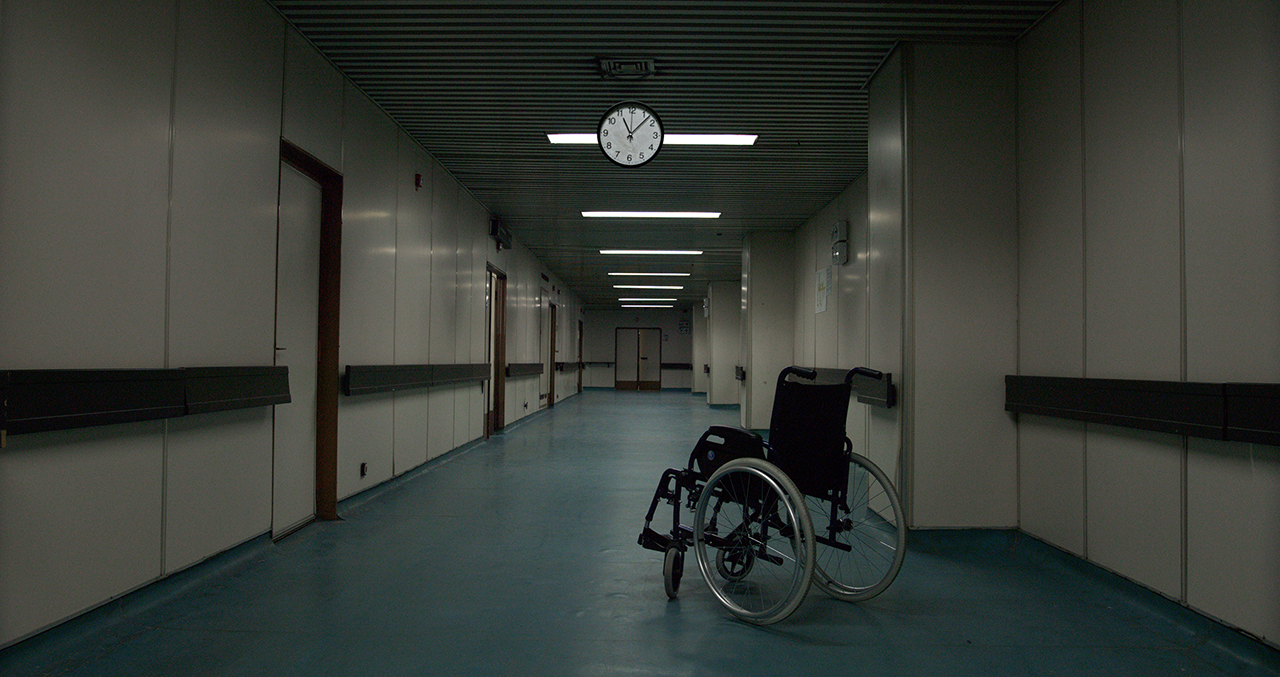 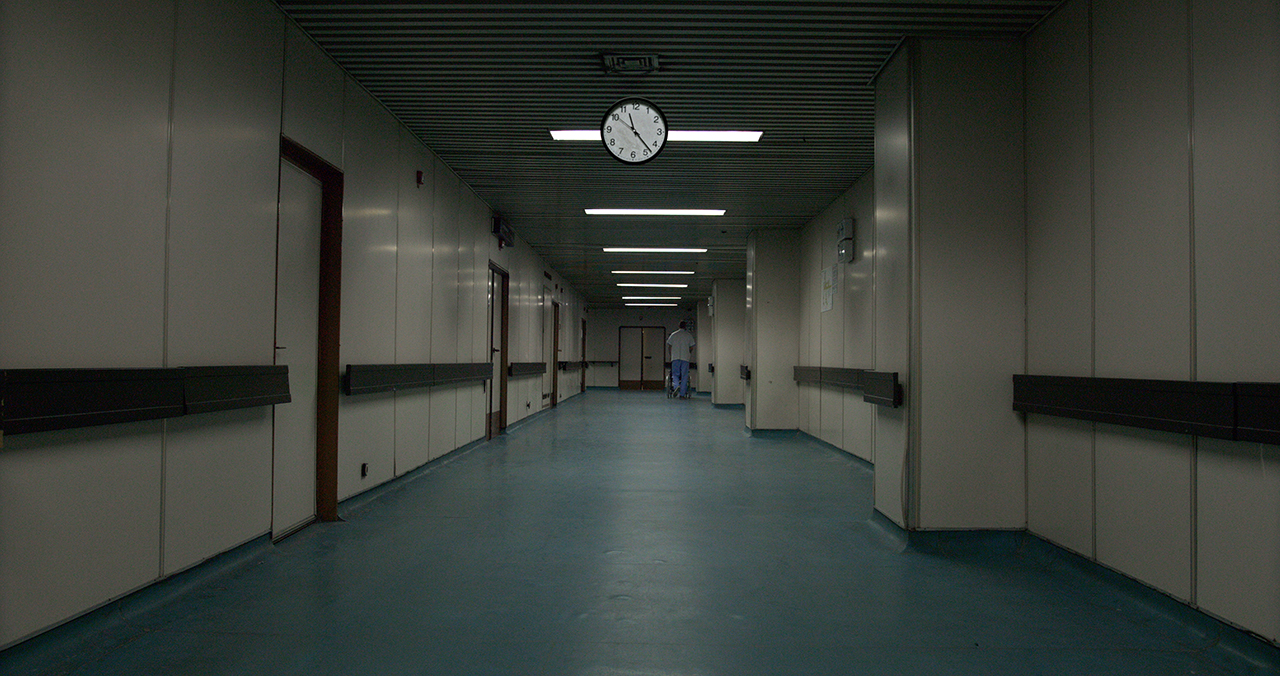 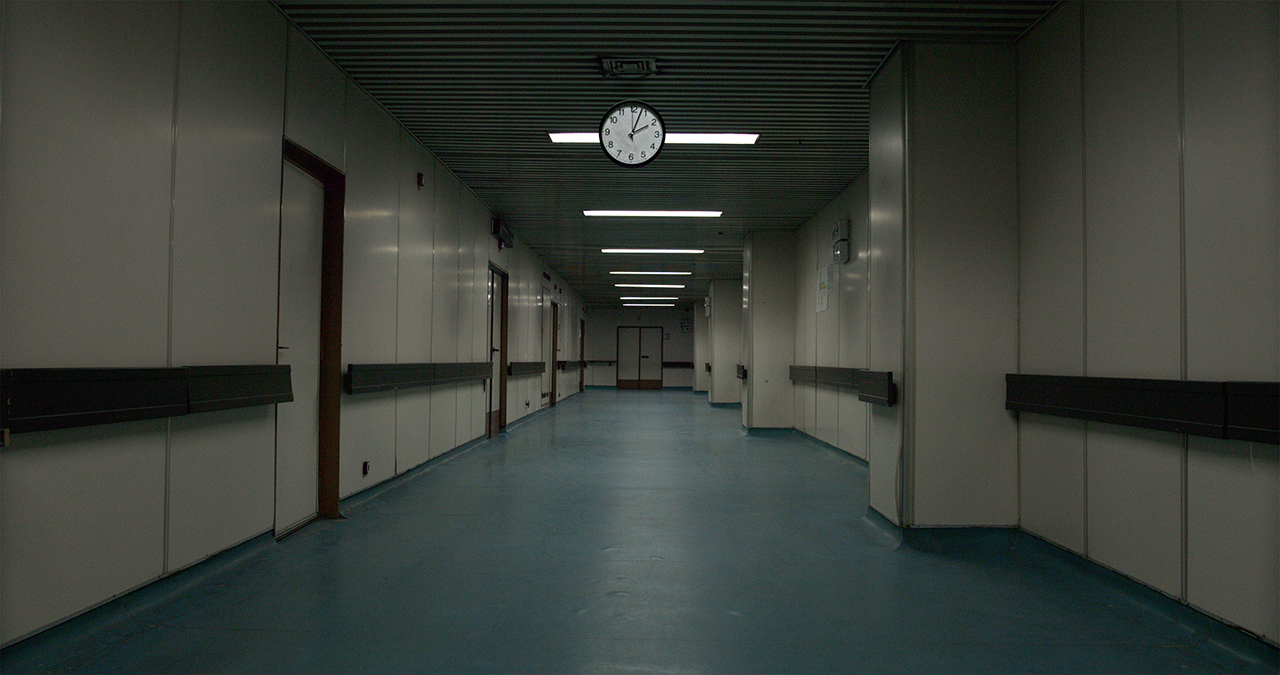 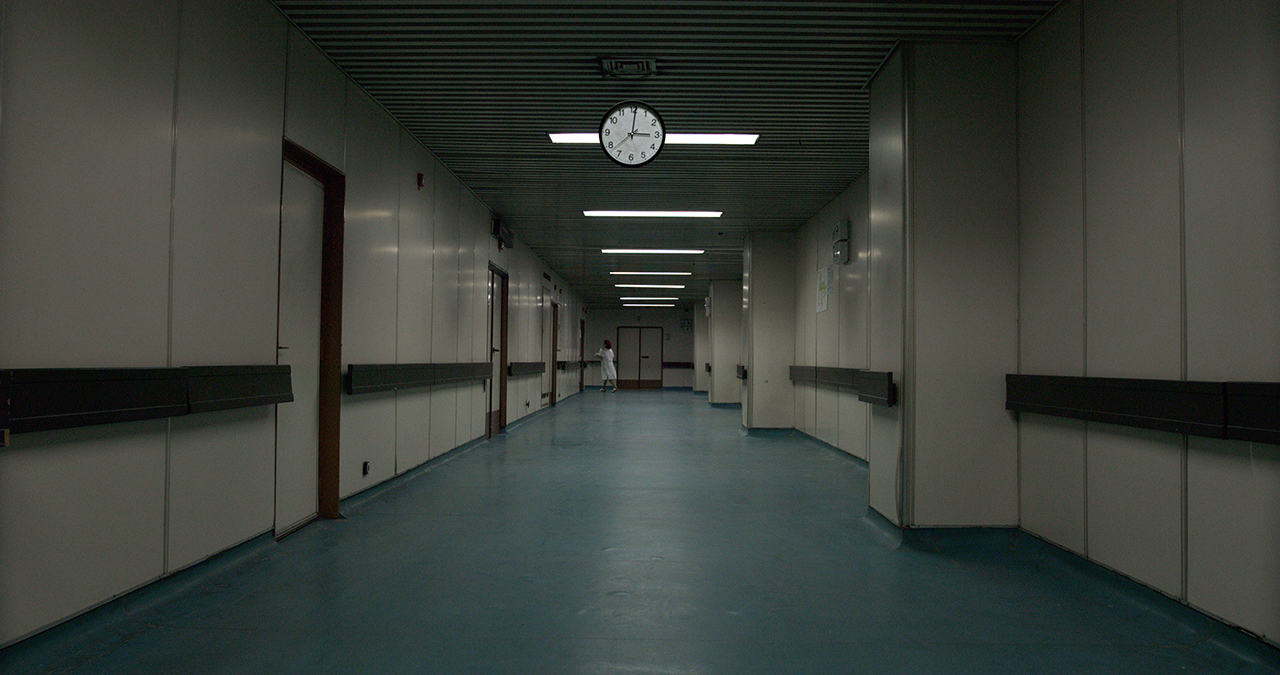 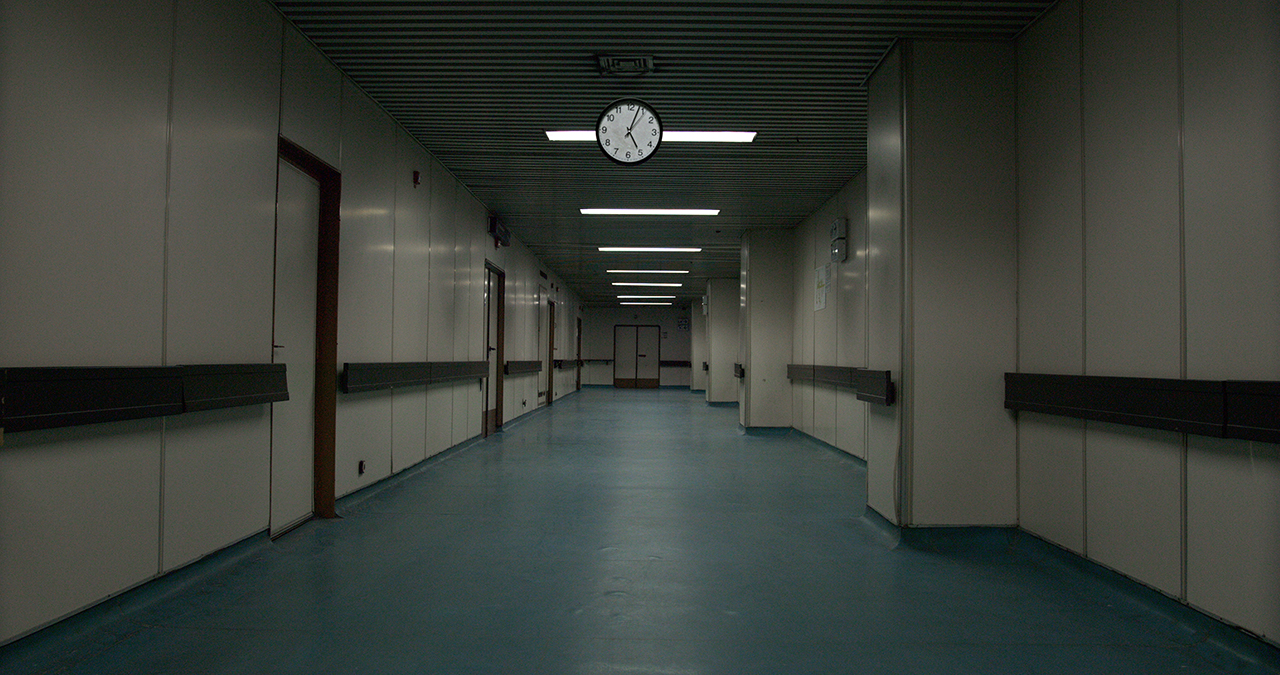 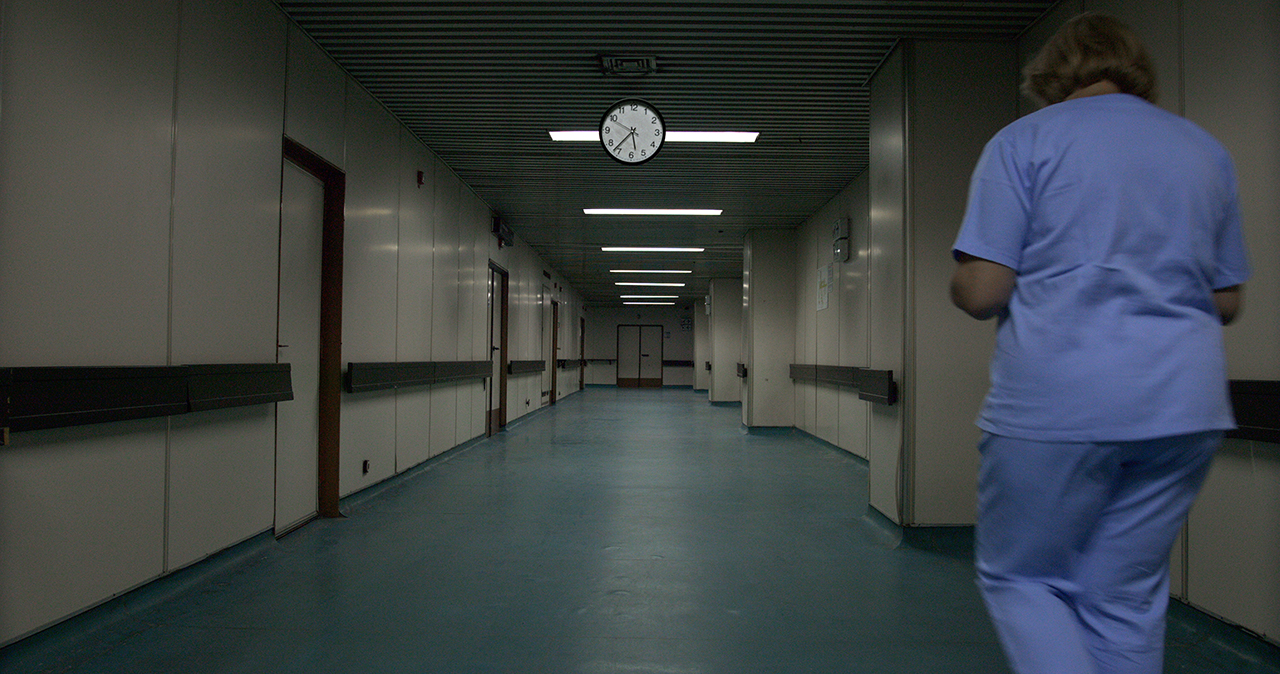 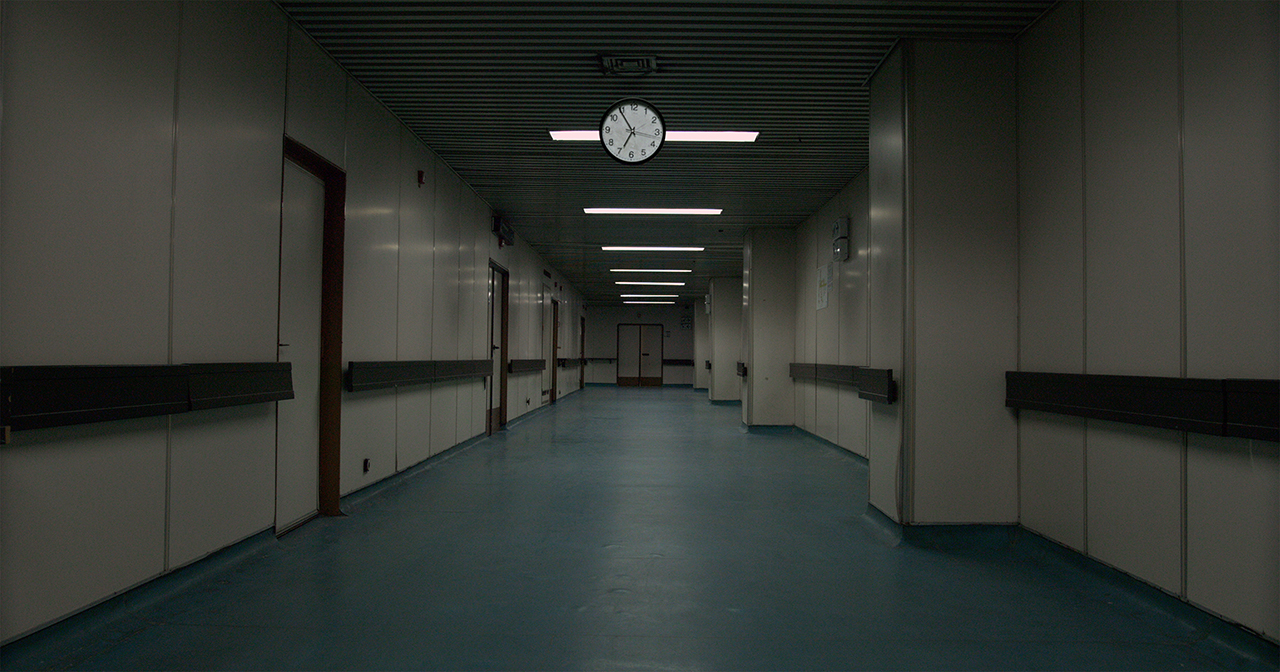 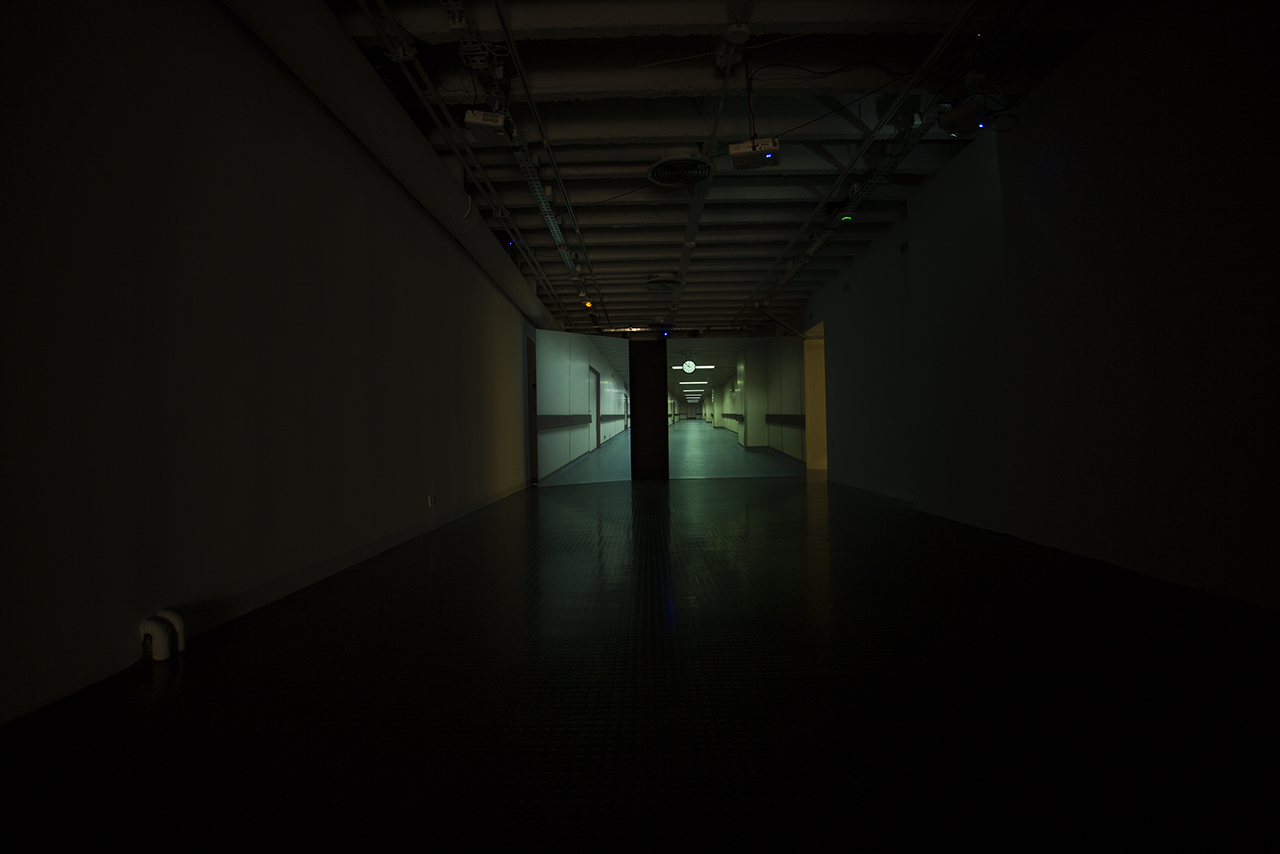 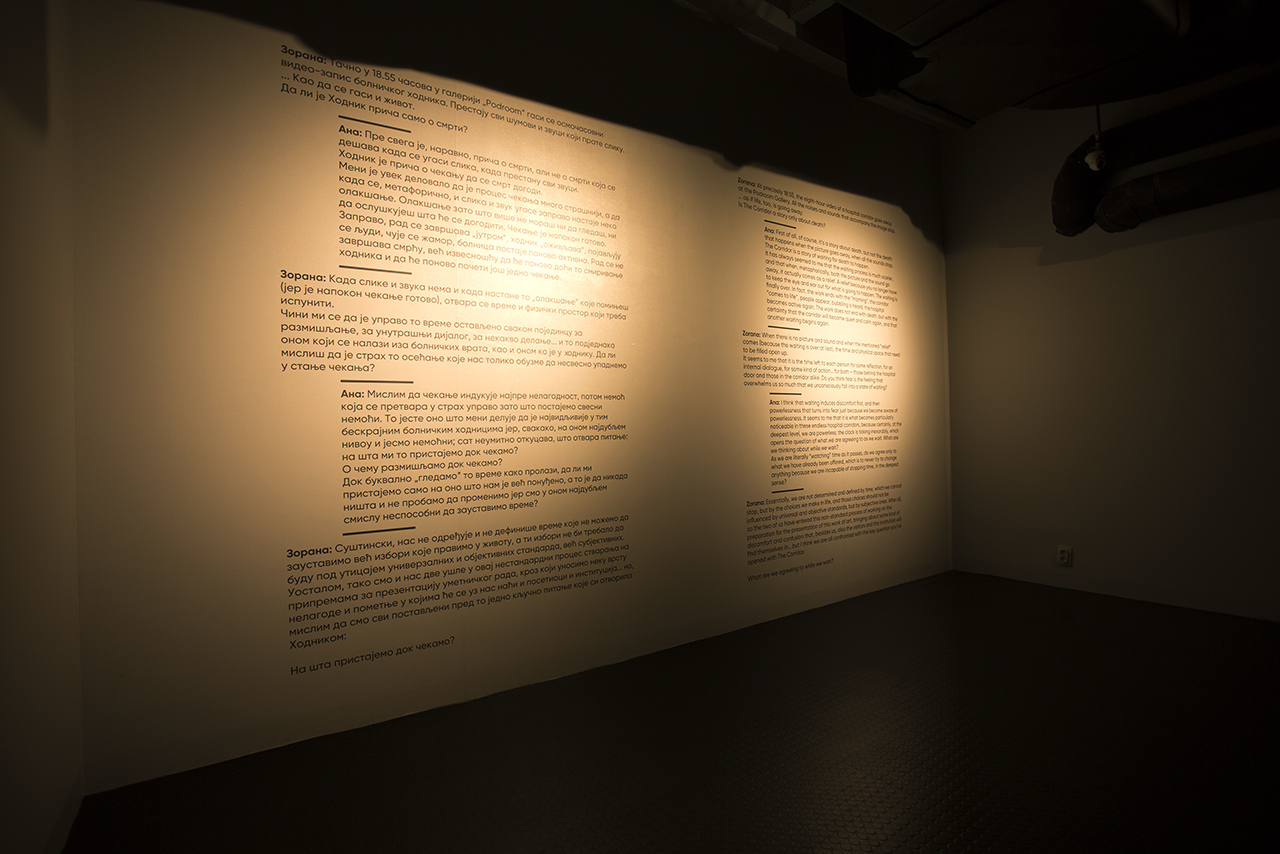 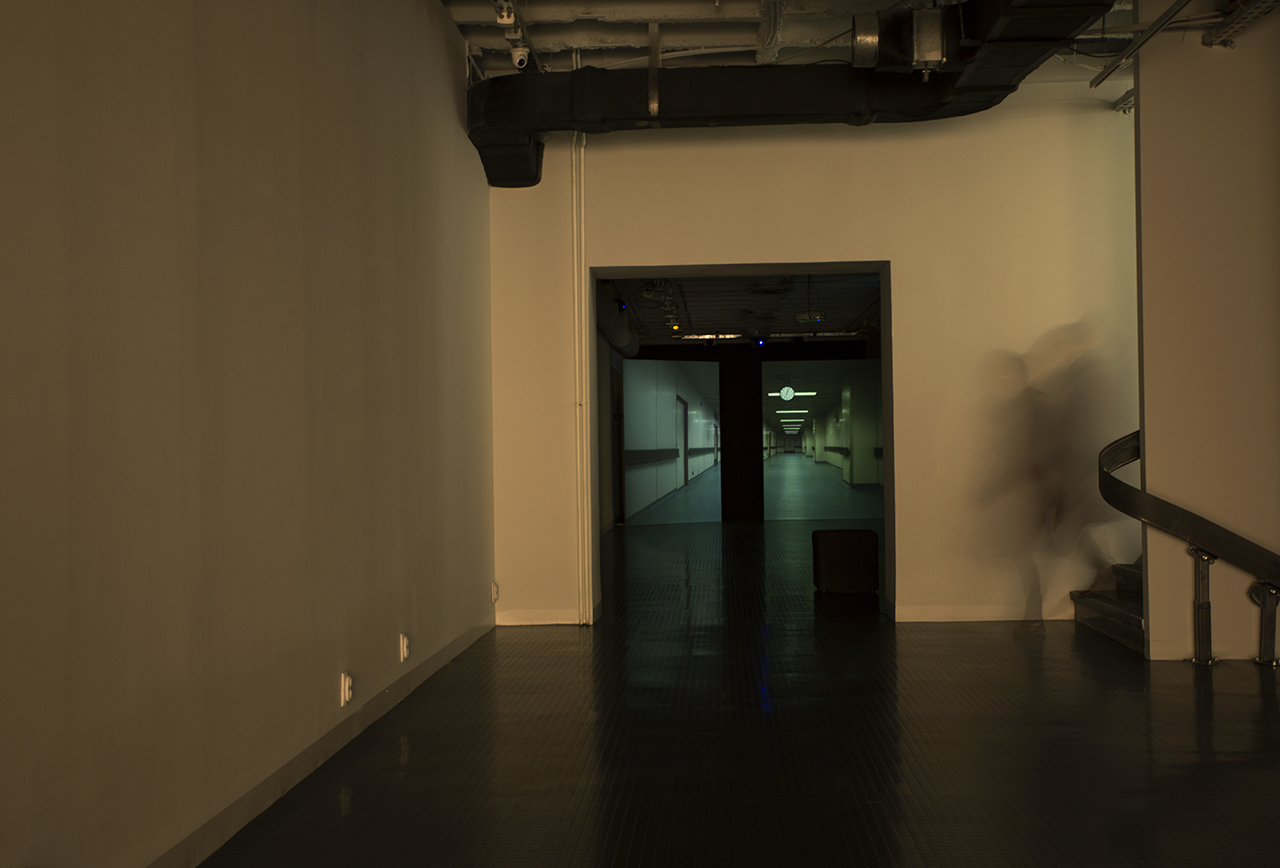 The Corridor narrates about the apparent void created by the flow of time, and the nausea that void is causing. For nearly eight hours the work follows a single scene – a hospital corridor. The corridor is empty, illuminated by the existing, hospital neon lighting. While the picture depicts only one, almost invariable scene, noises come from the hospital rooms, ancillary rooms, distant parts of the hospital, suggesting that the complete peace and emptiness of the corridor can be disturbed at any moment. There is no natural light source in the hallway to indicate the arrival of a new day, thus the only landmark for time is the large hospital clock that is constantly ticking while accurately marking passage of every single second. Thus, in the work time becomes the main protagonist, its flow the only certainty, and waiting the only activity.

A dialogue between Ana Adamović and Zorana Djaković, curator of the exhibition The Corridor, gallery Podroom, Belgrade Cultural Centre, November 2019:

Zorana. At precisely 18:55, the eight-hour video of a hospital corridor goes away at the Podroom Gallery. All the noises and sounds that accompany the image stop.

… as if life, too, is going away. Is The Corridor a story only about death?

Ana. First of all, of course, it’s a story about death, but not the death that happens when the picture goes away, when all the sounds stop. The Corridor is a story of waiting for death to happen. It has always seemed to me that the waiting process is much scarier, and that when, metaphorically, both the picture and the sound go away, it actually comes as a relief. A relief because you no longer have to keep the eye and ear out for what is going to happen. The waiting is finally over. In fact, the work ends with the “morning”, the corridor “comes to life”, people appear, bubbling is heard, the hospital becomes active again. The work does not end with death, but with the certainty that the corridor will become quiet and calm again, and that another waiting begins again.

Zorana. When there is no picture and sound and when the mentioned “relief” comes (because the waiting is over at last), the time and physical space that need to be filled open up. It seems to me that it is the time left to each person for some reflection, for an internal dialogue, for some kind of action… for both – those behind the hospital door and those in the corridor alike. Do you think fear is the feeling that overwhelms us so much that we unconsciously fall into a state of waiting?

Ana. I think that waiting induces discomfort first, and then powerlessness that turns into fear just because we become aware of powerlessness. It seems to me that it is what becomes particularly noticeable in these endless hospital corridors, because certainly, at the deepest level, we are powerless; the clock is ticking inexorably, which opens the question of what we are agreeing to as we wait. What are we thinking about while we wait?

As we are literally “watching” time as it passes, do we agree only to what we have already been offered, which is to never try to change anything because we are incapable of stopping time, in the deepest sense?

Zorana. Essentially, we are not determined and defined by time, which we cannot stop, but by the choices we make in life, and those choices should not be influenced by universal and objective standards, but by subjective ones. After all, so the two of us have entered this non-standard process of working on the preparation for the presentation of this work of art, bringing about some kind of discomfort and confusion that, besides us, also the visitors and the institution will find themselves in… but I think we are all confronted with the key question you’ve opened with The Corridor:  What are we agreeing to while we wait?

The work was supported by the Film Centre Serbia